​How to install and use SMA connectors?

SMA connector is a widely used half-precision ultra-small RF and microwave connector, especially suitable for RF connections in electronic systems with frequencies up to 18 GHz or higher. The following will briefly introduce the use of SMA connectors.

How to connect the SMA connector?

How to distinguish the quality of SMA connectors?

What is the meaning of SMA connectors?

How to connect the SMA connector?

2. Strip the shielded wire and the middle wire.

3. Insert the middle thread into the needle hole.

4. Solder with a little solder. Note: Do not get the solder out of the pins.

6. Put the matching small steel cylinder on the tail.

7. Put on the heat-shrinkable tube.

8. Blow the heat-shrinkable tube with a heat gun until the tail of the SMA head is wrapped.

9. Do the same operation on the other end to make one.

10. Make another one of the same lengths, and a pair of wires will be ready. 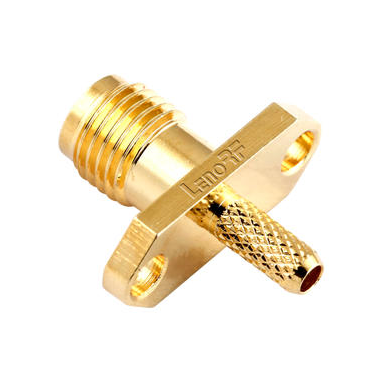 How to distinguish the quality of SMA connectors?

2. The denser the shielding layer, the smaller the signal leakage to the outside, or the smaller the leakage from the outside world. The general index is the isolation, and the isolation of a good cable can be more than 100dB. I see single-layer, double-layer, and rigid shielded coaxial cables that I buy in the market. Of course, the prices vary greatly.

3. In addition to the leakage of the cable itself, a part of the energy will be lost (generally very small), and the signal will be attenuated to a certain extent due to the electromagnetic wave's attachment effect and dielectric loss, but this has nothing to do with the shielding layer.

What is the meaning of SMA connectors?

The SMA-type RF coaxial connector was designed by Bendix and Omni-Spectra as an OSM connector in the late 1950s. It was one of the most commonly used RF/microwave connectors at that time. Initially, SMA connectors were designed for 0.141" semi-rigid coaxial cables and precision connectors for microwave applications in the military industry. They were filled with PTFE dielectric. Under the conditions at the time, due to the small size of SMA connectors, It can work at higher frequencies (the frequency range for mating semi-rigid cables is DC～18GHz; when mating flexible cables, it is DC～12.4GHz), and it is quickly popularized. Even the millimeter-wave connectors developed later (such as 3.5mm, 2.92mm) also consider the issue of mechanical compatibility.

As an important component in the communication network, the demand for SMA has greatly increased, but the products on the market have the problem of uneven quality. LenoRF has been focused on connector productions for several years. Their knowledgeable staff can find the best solution for any scenario. You can get any SMA connectors as you want there.