​What is the relevant knowledge of SMA connectors?

The SMA connector is often considered to be a component that is attached to a cable or installed on an instrument as a component for electrical connection or separation of transmission lines. It belongs to mechatronics products. Simply speaking, it mainly serves as a bridge.

What is the rated power of the SMA connector?

What do you think of the future of the SMA receiver?

2. The actual specifications of a given connector largely depend on the manufacturer and type, and several different quality and performance levels are available. It is best to check the connector specifications carefully.

3. Generally, SMA connectors have a higher reflection coefficient than other connectors up to 24 GHz. This is due to the difficulty of accurately fixing the dielectric support, but despite this difficulty, some manufacturers have managed to appropriately overcome this problem and can specify their connectors for operation at 26.5 GHz.

4. For flexible cables, the frequency limit is usually determined by the cable rather than the connector. This is because the cables accepted by SMA connectors are very small, and their loss is naturally much greater than the loss of the connector, especially at the frequencies they may be used. 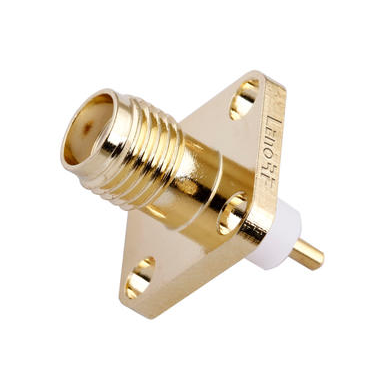 What is the rated power of the SMA connector?

1. In some cases, the power rating of the SMA connector may be important. The key parameter that determines the average power handling capability of a coaxial connector is its ability to deliver a high current and keep the heat up to a moderate temperature.

2. The heating effect is mainly caused by the contact resistance, which is a function of the contact surface area and the way the contact pads are together. A key area is the center contact, which must be formed correctly and fit together well. It should also be noted that the average power rating decreases with frequency because resistive losses increase with frequency.

3. The power handling data of SMA connectors vary greatly among manufacturers, but some figures indicate that some can handle 500 watts at 1 GHz, which drops to slightly less than 200 watts at 10 GHz.

What do you think of the future of the SMA receiver?

1. Multi-function: In addition to the function of the bridge, there are signal processing functions such as filtering, phase adjustment, frequency mixing, attenuation, detection, amplitude limitation, etc.

2. Miniaturization: With the overall miniaturization of the system, the size of the RF connector is getting smaller and smaller, such as very small SSB, MMCX, and other series.

3. Low standing wave and low loss: meet the requirements of the weapon system and precision measurement.

4. Surface mounting: Above all, meeting the development needs of SMT technology (surface mounting technology), simplifies the wiring structure of the multilayer printed substrate.

SMA connectors have many varieties and specifications, more than 20 international series, more varieties, and specifications, relying on the mechanical structure to ensure electrical characteristics, are mechatronics products and are essentially different from other low-frequency connectors. A good product starts with the best engineering staff, and LenoRF is always ready to do anything to meet the requirement of their clients. Choose the right company will need you to get the best products.

Zhenjiang LenoRF Industry co. LTD- LenoRF ™ ,is a special manufacturer for RF coaxial connectors,cable assembly and Passive Devices. It occupies an area of 30 hectares with the existing building of 2000 square meters.The company is equipped with a lot of the world most advanced equipment and apparatus for production. Our latest products are millimeter wave connector and phase stable cable...